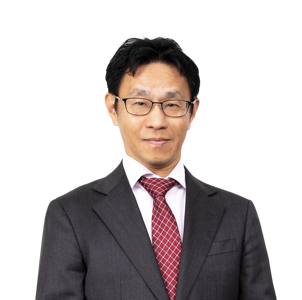 Mr. Kobayashi has wide-ranging experience in corporate, M&A, compliance, intellectual property, antitrust, international transactions, product liability and dispute resolution. Mr. Kobayashi has handled MBOs and corporate reorganizations of listed companies. He has represented directors in shareholder’s derivative actions and has won a case. As defense attorney for pharmaceutical companies, he has handled many cases of alleged contaminated medicines.

Mr. Kobayashi has handled establishing foreign capital’s entities and advising on their operations in Japan. He has also handled dispute resolutions in which foreign companies are involved.

- Director of the Japan Association of Arbitrators (JAA)(2020-)

- International Arbitrator of the Korean Commercial Arbitration Board (2018-)

2022.07.01
Economic Sanctions Against Russia and Other Countries - Measures to Prohibit Export and Others

2016.09
Protecting Personal Information Beyond the Borders of Japan

2015.06
Q&As on the Business Legal Practice: Business Expansion to Overseas Markets by Small and Medium-Sized Companies (1)

2012.02.15
Commentary on United Nations Convention on Contracts for the International Sales of Goods Vol.8

2011.12
Practical Guide to the CISG: Through a Comparison with Japanese Civil and Commercial Law

2007.01
The Japanese Language Translation of IBA Guidelines on Conflicts of Interest in International Arbitration

2021.10.12
SIAC and JAA Kansai Chapter Osaka Webinar Series: Part II From Negotiations to Constitution of the Arbitral Tribunal: A Practical Guide to Preparing for Arbitration

2019.04.19
【Osaka】Choice of Arbitration Rules and Drafting Arbitration Clauses in light of the Amendment of the Japan Commercial Arbitration Association (JCAA) Rules

2018.05.21
The Latest Trends in International Arbitrations and Mediations in Singapore: Effective Use of Alternative Dispute Resolution

2017.12.06
Latest Trends of Arbitration Practices in China and Hong Kong - Learning from Experiences Arbitrating at the HKIAC -

2017.09.20
Use of International Arbitrations - Learning from Experiences Arbitrating at the SIMC

2017.07.06
Current Updates on Arbitration in China: Enforcement of Foreign Arbitral Awards in Mainland China and Recent Practices in Hong Kong and Shanghai

2017.02
4th Seminar on Indonesia (held in Japan): "Problems on Indonesian Laws and Regulations from the Perspective of Japanese Investors"

2016.10
International Dispute Resolution Seminar: Latest Updates on Arbitration in Korea - Practical Differences between the KCAB and the JCAA

2016.10
Knowhow to Avoid Failures in Overseas Joint Ventures for Small and Medium-Sized Enterprises - A Seminar Focusing on Key Clauses of JV Contracts

2015.10
Basics of the Legal Practice on Cross-border M&As/Joint Venture Agreements

2015.10
Strategy for Asia and Risk Management by Global Enterprises - with an Eye to the Establishment of the ASEAN Economic Community (AEC)

2015.09
Kroll Ontrack Seminar in Osaka: "Before Your Company is Ruined"Regulations Against the Bribery of Foreign Public Officials, including the FCPA, and Prevention Mechanisms Therefor

2015.09
The Realities of Arbitration between Japanese and Chinese Parties as Explained by the Staff of Arbitral Institutions - To Learn About the Arbitral Proceedings of SHIAC

2014.10
Issues on Combatting Bribery of Foreign Public Officials such as FCPA

2014.01
How to Give Advice to Small and Medium Enterprises on their Business Development in ASEAN Countries

2011.12
International Jurisdiction - The Amendment of the Civil Procedure Act in 2011